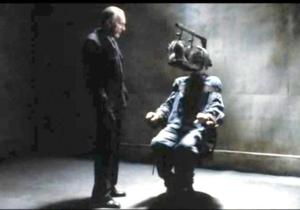 The founder of Lavabit, Ladar Levison, has spoken to Democracy Now about his decision to close his encrypted email service, rather than, as he said, be forced to commit crimes against his fellow Americans.

Although Levison is prevented from talking about what this means, because a secret system which operates outside of judicial oversight would automatically see him given a five year prison sentence if he did, it is widely believed that his decision to close Lavabit, without any prior warning to his hundreds of thousands of paying customers, was in response to being ordered to give the security services back-door access to the emails of NSA whistleblower Edward Snowden — a user of Lavabit.

You don’t need to be from the tin foil hat brigade to see that, unless something is done to shut down this blatantly unconstitutional legal loophole, it could well be the start of a cascading series of events which result in mass public disobedience and demonstrations. There are people on the streets of Egypt, Syria, and other countries around the world, who are fighting to rid themselves of exactly this kind of police state tyranny and mass surveillance. To suggest “it couldn’t happen here” simply isn’t backed up by the facts.

Last week, President Obama went on television, to tell us with a straight face that some of the speculation in the press and on-line about the kinds of data that these laws allow the security services to collect are “far fetched”; that the actual content of emails and phone calls are not monitored, and that there is no program set-up for the wholesale monitoring of the American people.

But as anyone with even an ounce of understanding about how the internet actually works will tell you, the so-called meta-data which the secret police do admit to gathering, tells them far more about the ins and outs of our daily lives than the content of our phone calls and the wording of our emails ever could — because it contains geolocation data, timestamps, and the name of the person sending the information — and since it is now against the secret law to encrypt your communications, most SMS text messages, emails, instant messaging and video conferencing is transmitted as plain text, which anyone with the right equipment can intercept.

And even if a person accused under these secret laws of committing secret crimes, on evidence which no judge or jury can ask to see is ever allowed into a court of law to defend themselves, the security services do not need to disclose any details of what they collected and why they collected it, but can instead simply assert that it is within their legal remit to gather data in the interest of national security, and the accused’s legal defence is forbidden from asking anything more about it. It is their word against yours, and if you don’t like it, enjoy your stay in prison.

The American people are proud of their constitution and the founding fathers who wrote it. Just as we British are proud of our parliamentary democracy. Indeed we’re all proud of the work which the vast majority of security specialists carry out, to keep us safe from terrorists, and those who wish us harm. But these secret laws can’t protect us from ourselves, and are quickly turning us into the very thing we’re so desperate to avoid becoming.

The people who have implemented these secret laws are unpatriotic, money grabbing, power hungry, paranoid puppet masters, with as little respect for ordinary people as they have for themselves. They are the same cabal of superrich, who protect their banker friends from criminal investigation into the worldwide financial collapse, while funding Super PACs which put more poor people into privately run prisons than any other country in the world. They are the same low life who want to put you in jail for sharing music via BitTorrent, while they issue letters to your Internet Service Provider, requesting your private information to be handed over with no questions asked, which the ISP’s aren’t even allowed to talk about to their own legal team.

But perhaps the most troubling part about all of this, is that these are exactly the kinds of abuses which while still a US Senator Barack Obama warned of, and expressed a wish to do something about. This can only mean one of two things. The first possibility is that at some point shortly after becoming President, Obama had certain information revealed to him which is so critical to national security that it takes precedence over all other concerns, in which case there is no longer any such thing as due legal process, and the American government has become the very kind of domestic tyranny the founding fathers warned us about. Or, two, the rich white men who own him have made it abundantly clear to Obama that it’s called the American dream because you have to be asleep to believe it. Either way, this is how empires come to an end. This is how democracy dies.

Are you going to take it sitting down? Donate to Lavabit here and help Ladar Levison take this all the way to the supreme court. Those who have tried in the past have been silenced, and forced to settle out of court.

Support the mounting campaign to force Apple, Google, Microsoft and other titans of the modern age to say publicly what everyone in the technology industry is saying privately; that this is wrong, and we will not allow it to happen. If we stop using FaceTime, and Skype, if we boycott GMail and Yahoo!, if we tell the businesses whose entire fortunes rests upon our trusting them to provide a secure and transparent service, that we’re mad as hell and we’re not going to take it anymore, they will have no choice but to listen. They will be on the side of their own customers, when it comes time to debate this issue at the highest levels. They will use their power for the good of everyone, not just the tiny minority who want to keep us frightened and silent.

It does not matter what your personal politics are. This is not a red team versus a blue team issue. It is about defending democracy and the rule of law. Write to your political leaders, and demand that they exercise their privilege to speak on the floor of the house about this clear and dangerous abuse of power — because the people who it affects have literally had their right to speak about it taken away.

One comment on “Secret Law, or this is how democracy dies.”

New comments are added to old threads all the time…